Today, October 21st the CBI releases new 25K & 5K IQD notes.  Be sure to see my WARNING below, after the news article regarding Con Artists and Hack Gurus who will “spin” this news to try to steal your Dinar and/or Money! 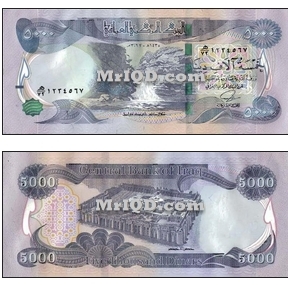 You can go to the Arabic language side of the CBI.iq to see the news for yourself – remember, always verify from legit sources!

This news Article from the CBI talk about adding a new 25K note as well as a 5K note – what interests me, in my opinion they also essentially state that they will circulate with the existing money, not to replace the existing IQD notes! This is the same process we use here in the United States! I have more comments at the end of the article below…

Central Bank announced on Tuesday, near posed to the categories of the 25 thousand and five thousand dinars, “Bhlthma new,” promised new specifications for the two currencies as the “insured that are difficult to counterfeit,” and while pointing out that the most important changes to the currencies add a security to “magnetic ink”, he stressed not his intention to withdraw the above categories.

The bank said in a statement received (range Press), a copy of it, “that in order to develop the current series of banknotes of Iraq, and to increase efficiency, it has been printed categories of the 25 thousand and 5 thousand using the finest paper and placed where the characteristics of art and several security,” noting “The two new categories Sttrhan during the next few days in the market.”
The statement added that “the Bank has no intention to withdraw the above categories and will continue to trade…   [Despite the bad translation, in my opinion the CBI is telling the Iraqi citizens that their “old” IQD notes and their “new” IQD notes “…will continue to trade…”] …and naturally,” explaining that “groups carrying specifications and signs of a new high-security protection, in addition to the security tags in categories”.

The statement continued that “the most important variables that have been added to the category with the (5000) BD is that the paper contains a string ensure the buckle width (4 mm) bears the words (CBI) contains the effects Animations changes color from green to blue when the note is tilted , and as a sign of security paper bearing magnetic ink color variable (SPARK) changes from green to blue when the banknote is tilted. ”
The statement pointed out that “the category of (25000) has been modified image of agriculture and the field in the face of the sheet where bear farming pitcher of water appears behind a tractor plowing the field, as was a change in the size of the decoration on the right side of the face sheet of the need to develop a transparent window and add a bar to protect the window appear in the image below Palm transparent color (color ribbon), as well as a modified form of decoration on the left side of the face sheet of the necessity of art with the general shape of the paper. ”
The central bank statement that “the category of the 25 alpha include thread ensure the buckle bears the words CBI contain stimuli moving it changes color from purple to green when the note is tilted,” noting that it “has been chosen the color green to be different from the color of the paper red and the audience can From his observation, as was marked advanced security known as (transparent window) in the right corner top-to-face banknote, showing a picture of the minaret Helicobacter when placed on a white background, while the number appears category (25000) when placed on a dark background. ”
The statement noted that “the paper also included a tape of metal extends from the transparent window to display the banknote contains the Palm and the category number changes color when you tilt the banknote,” explaining that “the paper marked security ink magnetic variable color (SPARK) changes from purple to green when the note is tilted cash has been selected to be a green color different from the color of red paper and the audience can be seen. ”
The statement stressed that “has been modified dates Islamic and Gregorian calendars in the two papers to the two dates (1435 e 2013), as well as they were carrying the signature of the governor and the agency, Dr. (Abdul Basit Turki Saeed), also containing a sign the blind which is a horizontal line straight prominent when the texture on the left side from the face of the papers, as well as add capillaries visible and invisible to the banknote in addition to painting paint markets to sustain life and resistance to dust, also include paper sign blind which is about three straight lines prominent when the texture on the left side of the face of the paper. ”

And between the Central Bank and in accordance with the statement: “Add capillaries visible and invisible to the banknote in addition to painting a protective coating to sustain life and resistance to dust.”
The CBI, revealed in (7 August 2014), that the end of the month of August will see the launch coin ten thousand dinars Bhltha new, and among the old currency from the category of ten thousand will not be withdrawn from Iraqi markets, confirmed that the other categories of currencies Iraq will be put up new forms successively until the end of this year.

First, thanks again MarcG for finding this article!
Next, I was saying that from my understanding of the article, the CBI is telling us the new 25K IQD and 5K IQD notes will circulate WITH the EXISTING IQD notes.

There are Hack Gurus and Con Artists out there that will try to scare you to believe that your current “old” 25K IQD or 5K IQD notes will now be worthless. Don’t Believe THEM!!!

That said, then the Hack Guru, will probably have “good news” for you and tell you that if you mail to them, or meet them at a Hotel, they can guarantee that you get your “old” 25K and 5K notes traded in for the “new” notes, so you don’t lose any money! SCAM ALERT!

In my opinion, they will get you to mail your “old” 25K and 5K IQD notes in to them, or meet them at a Hotel, then all you will get a “receipt” because they just ran out of the new notes. Or, the shipment didn’t come in via FedEx like it was supposed to. Or, some other more cleaver excuse.

Point being…. You leave them your dinar, and they will disappear!  Please don’t be fooled in to losing your IQD – keep it locked in your safe, where it belongs for now.