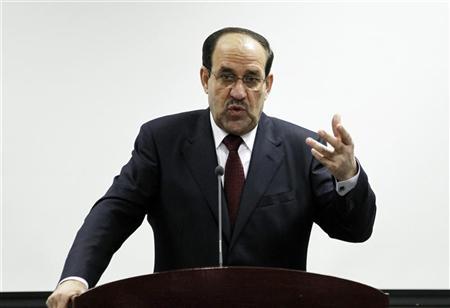 Maliki – “Why Yes, I want to be your next benevolent Dictator!”

(Reuters) – Sunni leaders in Iraq accused Shi’ite Prime Minister Nuri al-Maliki of a crackdown on Friday after troops detained a Sunni minister’s bodyguards, triggering protests in one province and threatening to reignite a crisis a year after U.S. troops left.

The incident with the finance minister’s staff came hours after President Jalal Talabani, a Kurd who has mediated among Sunni, Shi’ite and Kurdish factions, left for Germany following a stroke that may end his steadying influence over politics.

Talabani’s absence and renewed political tensions are placing pressure on the OPEC producer’s fragile power-sharing government, which is split among sects and ethnic Kurds and has stumbled from crisis to crisis since U.S. soldiers withdrew in December 2011.

Growing political tension in Baghdad is also exacerbating a growing rift between the Arab-led central government and the country’s autonomous Kurdistan enclave in the north over the control of oilfields and land.

After Friday prayers, several thousand demonstrators took to the streets in the Sunni stronghold of Anbar, blocking a highway in Falluja, demanding Maliki’s resignation, and waving banners reading: “Resistance is still in our veins”.

The protest was peaceful.

Angry Sunni leaders warned they might withdraw from government if they cannot participate in an investigation into the detentions and called for a vote of no confidence in Maliki, whom they accuse of abusing his power to sideline electoral rivals.

“My message to the prime minister is that you are a man who does not believe in partnership and does not respect the law and the constitution,” Finance Minister Rafaie Esawi said.

“You want me to believe Maliki had no idea about this? No, this happened with previous planning and intent.”

Politicians and the authorities gave conflicting accounts of the incident, but said it evoked a similar episode a year ago when Iraq moved to arrest of Sunni Vice President Tareq al-Hashemi, accusing him of running death squads just as U.S. troops packed up.

Esawi said more than 100 bodyguards and staff had been illegally snatched by militias, and blamed Maliki. But the premier’s office said only six bodyguards had been arrested and that the warrants had been issued under counter-terrorism laws.

A U.S. embassy spokesman said: “Any actions from any party that subverts the rule of law or provokes ethnic or sectarian tension risks undermining the significant progress Iraq has made toward peace and stability.”

Ali al-Moussawi, Maliki’s media advisor, said the judiciary had issued arrest warrants for minister’s bodyguards and accused rival politicians of trying to stir tensions by linking the case to the premier.

“The law and judiciary for them have no value, they see only political differences,” Moussawi said. “They blame Maliki for everything.”

A year ago, the Hashemi case plunged the country’s delicate power-sharing deal into turmoil, with Sunnis boycotting parliament and cabinet.

Hashemi accused the government of torturing his bodyguards and fled only to be sentenced to death in absentia.

Since then, Maliki has managed to play his rivals off against one another to strengthen his position in Iraq’s complex, shifting political landscape, and his opponents have been weakened by internal splits and infighting.

Violence in Iraq is down sharply from the days of intercommunal slaughter that erupted soon after the 2003 U.S.-led invasion that toppled Sunni dictator Saddam Hussein. But sectarianism still runs deep in Iraqi politics.

Sunni political leaders have long accused Maliki of failing to share power as he consolidates his authority under a constitution granting the premier wide powers. Shi’ites point to Sunni leaders in top posts like the speaker of the parliament.

With the political system and much lawmaking paralyzed by infighting among fractions, Maliki has said he may try to form a majority government with some Sunni leaders.

A parliamentary vote is set for 2014.

“You cannot outright dismiss electioneering as a primary calculus,” said Ramzy Mardini, an adjunct fellow at the Iraqi Institute for Strategic Studies in Beirut. “If Maliki can’t co-opt Sunnis to form a majority governing coalition, he’s going to make sure the Shi’ites are consolidated behind him.”

Talabani, 79, a former militant who was admitted to hospital on Monday, had often mediated among Shi’ites, Sunnis and Kurds, as well as in the growing dispute over oil between Baghdad and the autonomous Kurdistan region.

Foes of Maliki, an ally of Iran who spent years fighting against Saddam’s rule, tried earlier this year to organize a vote of no confidence in him. It failed because Talabani did not back the vote and because of splits among Maliki’s rivals.

Before the detentions, most politicians were publicly wishing Talabani a speedy recovery. But behind the scenes, some senior Sunni political leaders suggested they may present their own candidate for the presidency in a challenge to the Kurds.

Under the constitution, parliament elects a new president and a vice president takes over in the interim. The power-sharing deal calls for the presidency to go to a Kurd while two vice presidential posts are shared by a Sunni and a Shi’ite.

The Sunni vice president, Hashemi, is a fugitive. The other vice president is Khudair al-Khuzaie, seen by some as a hardline Shi’ite from Maliki’s alliance.

Among Kurds, former Kurdistan Prime Minister Barham Salih is favored as a leader with ties across Iraq’s sectarian divide. But there could also be a struggle within Iraqi Kurdistan, where Talabani’s Patriotic Union of Kurdistan party shares power with the Kurdistan Democratic Party.
SOURCE:  http://tiny.cc/g17npw